This year I was going to make a new years resolution to get down to 11 stone which would be ~2 stone more to lose. During 2012 I lost a stone, so hopefully with a bit more determination 11 stone would be achievable.

But whilst setting this I had a thought and decided I’d rather just be fitter generally than get to a specific weight, so I’m changing the aim to be generally fitter for everyday life.

I can’t really think of any measurable goal to judge success by. If I could run then I’d find a race type thing to enter, but I really fail at running. Last time I ran from the house to the car my knee’s ached, nothing new as I seem to remember being in the same pain running at school too, I was very glad that I could get through GCSE PE without doing any unpleasant sports. My GCSE in PE comprised of Sailing, Kayaking, Orienteering and trampolining 🙂 oh and blagging my way through a written examination!

If anyone can think of something measurable then let me know, else I’ll judge myself against the wii fit.

By putting my plan to get fitter in to writing then I hope I’ll have more of a responsibility to succeed at it. My current plan is to continue with the sports I’ve done last year, albeit on different nights than last year, which will be ice skating on Wednesdays and the Rosemary Conley Diet & fitness class on Thursday’s (I lost the stone last year through these classes and skating). I hoping to supplement this with some weekend sport, cycling would be an option, I used to ride my bike quite a lot for getting to and from university, but my bike has been sat outside the house unused for over a year now. Embarrassingly this is due to not liking the look of the hill that we live on, as I’d have to go up the hill on the exit and return of a ride due to the positioning of the entrance! Maybe my fitness test could be getting up the hill without stopping and pushing!

So my conclusion was to try roller skating, as I found fitness skating as an option given on line as a low impact activity. I used to mess around in the yard at home on the farm for hours on end with a pair of skates (The last pair I had were purchased from JJB sports during their opening event in Threemilestone, but I think I had a couple pairs before this! I can’t remember roller skating since I broke my leg, which I think was in 2003 so about 10 years ago, but I’ve started ice skating since, so was hoping that the skills required would come back to me easily and quickly!

I was shopping in Truro and found a pair of skates on sale for £30 and wrist guards, knee pads and elbow pads on sale in a set for £10. A much as buying the protection seems a bit overkill, especially as I don’t remember wearing any before, but I hope I’ve grown a bit more sensible over the last 10 years! 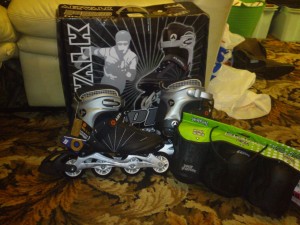 I’m not really expecting them to last very long, or be very good for £30. Mainly due to them being in the store on the shelf next to £25 a pair ice skates, which I would imagine being pretty crap too, but at least I can check that I’ll make use of them and if I do then spending £100 on getting a decent pair wouldn’t be so bad!

I have a slightly issue with the set of protection I bought, The max size they had was adults XL, which I thought would be a bit too big but at least I could put them over clothes and do them up tighter. The elbow and knee pads fit ok, albeit snugly. The wrist guards which I was thinking would possibly be the most useful hardly fit at all. I can just about do up the top strap with it a bit tight around my thumb, but the strap around my wrist wont get close to fitting. They will just about stay on thought, and as the point of them is to try and keep the skin on my palms then they’ll do. My main concern is that my hands aren’t that big, so what do people with big hands do!

After getting them I had a skate up and down the yard at home in Cornwall, but is was very wet and slippery, so it ended up being very quick! It was long enough to realise that it’s not going to be quite as easy as I thought, stopping isn’t quite as easy as it is on ice!

Today I went out for the first weekend skate up and down the cycle path that runs along side the Bitton steam railway.

My first failure was getting there and realising I’d picked up the set of pads but had forgotten a helmet, but after quick thought I decided a helmet wasn’t really needed. Any falls would probably be similar to ice skating, so knees and hands, and pads would be useful as tarmac doesn’t seem so forgiving!

Even though I’d imagined that it’d be easy, I wasn’t sure how far I’d get, and wasn’t really sure how fast you can go on skates, but I thought that based on ice skating around in an ice rink for an hour or so being reasonably easy and not that exhausting that I could expect to roller skate for about that long. Turns out I was wrong!
I put my skates on at the car then had the first challenge, a slight hill, but the time I’d got to the top one of my calf muscles was hurting slightly, tightened up the skates a little, and set off towards Bath. All was fine for almost 1/2 a mile, then the tarmac changed to slightly looser, not really noticeable, but made a surprising difference to skating, after pushing along for a bit I turned around and went back. Once back to where I started my legs were aching so I sat down and looked at my phone and was surprised to see that I’d only been just over 10 minutes since getting out of the car, and this included putting skates on. My phone was saying that I’d traveled a mile which I was happy with :). After a sit down I went to leave and found my legs were fine, so went back down the path to where the tarmac changed and back, once back my legs were sore again, but this made the trip 1.73miles and took 21 minutes in total. Apparently my max speed was 9.1mph with an average of 4.9 (not sure if it included me sitting down for a few minutes in this) this can all been seen on endomondo which I used to record my skate here: http://t.co/ob9pyO8x.
The greatest success of the day was that I didn’t fall over, and probably looked reasonably competent, unless you saw me trying to get up the hill, during the couple times I got off balance and waved my arms around whilst on one foot trying to get back on balance, or when I stopped myself by slowing down a bit then grabbing a fencing post to stop! Hopefully I can improve on these points next time 🙂

At the start of the day I thought I could go out and skate like I would ice skate, but it turns out that isn’t the case! The skates feel clunky, I think this is because of how big and sloppy they are.
10 years ago I’d have chosen loose fitting sloppy shoes like the roller skates any day, but these days tight fitting proper leather shoes and boots with correctly fitted insoles are more of my thing, so maybe that’s why. I even like my new ice skates more than my old ones because they feel tighter, the difference between the fit of the roller skates and either pair of ice skates are miles apart!

After this afternoon my conclusions are that:
I really need to learn to stop properly, today I was using the uselessness of the bearings to slow me down and eventually stop!
Not push with my toes at the end of a push, the wheel just spins and you don’t go anywhere other than loose your balance slightly.
I should practice turning around (I had to shuffle around in the circle)
It’s quite easy to off balance yourself, by moving your weight outside and it’s quite hard to get back.
Roller skating isn’t like ice skating at all!

I’ll keep trying to roller skate whenever the weather is dry and I have a few spare mins at a weekend, but I’d still rather be using the ice skates! 🙂